On 25 and 26 November 2021 the three above-mentioned EU sister projects are organising a joint online conference:
We will discuss cultural-structural perspectives of gender quality work in European Research Performing Organisations (RPOs) under the conference title "Culture eats (a gender equality) strategy for breakfast? — Structure eats (a gender-sensitive) culture for lunch?".
On day one, we will [...]
read more ...

Series of workshops on Gender Equality for Horizon Europe 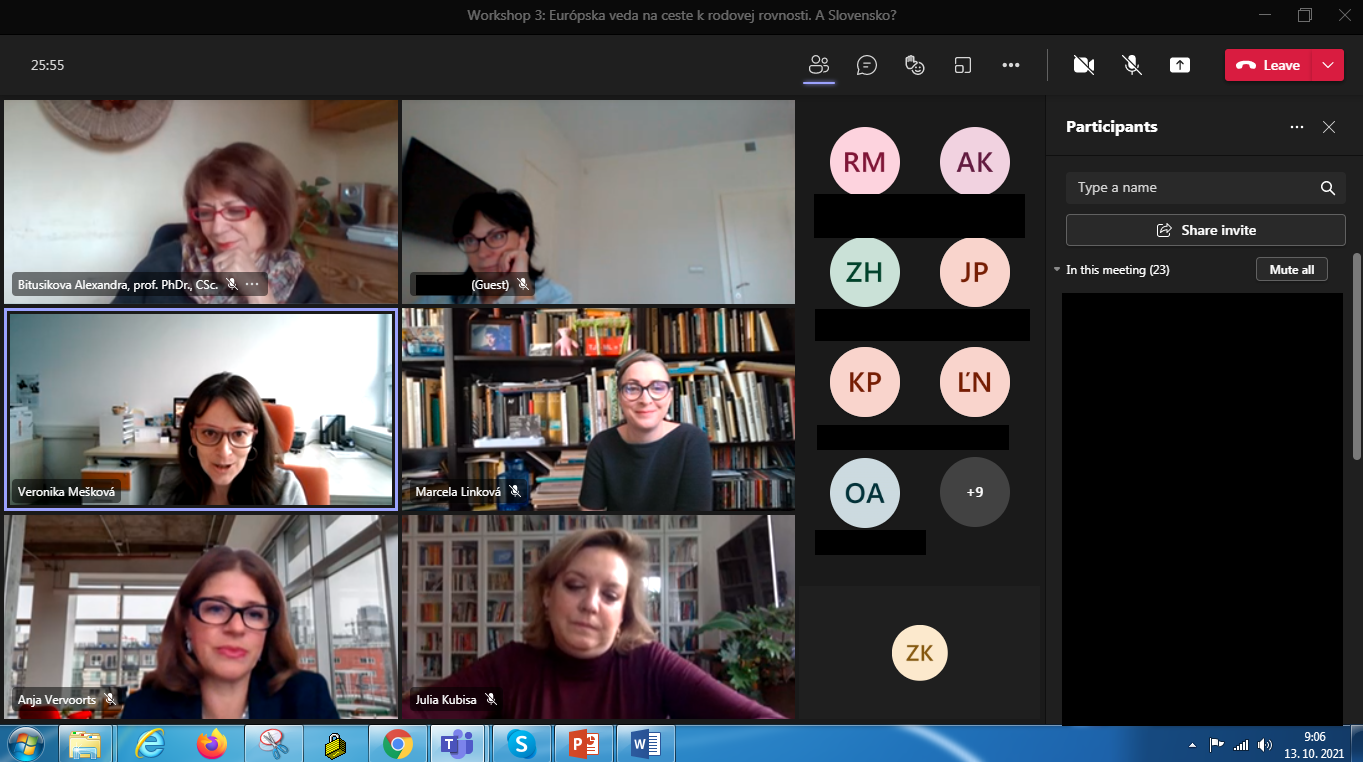 The UNIZA CHANGE team planned a comprehensive "Series of workshops on Gender Equality for Horizon Europe". The online events were designed for management teams of Slovak universities including the staff who will be in future involved in the drafting of the GEPs. All four workshops were held in October 2021. The aim of the series was to guide in GE less experienced institutions through this topic, starting with providing of the theoretical basis, through summarizing what has been done so far at Slovak universities, considering the European context (focus on GE in past and current funding programmes) and finally, including recommendations for the GEP preparation. Participants had opportunity to share their ideas in small discussion rooms.

We were honoured to host up to 40 participants during the 4. workshop.
read more ...

Members from the UAVR team (Portugal), from BBC (Isreal), from IFZ (Austria), and from IFAM and RWTH (both Germany) participated in the 11th European Conference on Gender Equality in Higher Education (GEHE 2021). This biennial event took place from 15th to 17th September 2021 in a virtual format and engaged practitioners, researchers, teachers and R&I managers from different countries in Europe and beyond. Within this conference, Sara Diogo (UAVR team) presented a paper about "Challenges in incorporating the Gender Perspective in Higher Education Teaching and Research: the case of a Portuguese University". Hana Himi and Maya Ashkenazi gave a talk titled: " Examining gender unconscious biases and good-practices: BBC- Israeli academic college as a case study". Jennifer Dahmen-Adkins and Madlen Baumert from the German CHANGE team, supported by Janne Haack, gave a presentation on how to become a CHANGE agent starting from being a technical researcher. Madlen and Janne reported on the challenges they overcame at a technically oriented research institute and outlined which circumstances were supportive for them. Julian Anslinger and Sandra Karner from IFZ gave a talk about "Changing technology research for good? The Austrian case.", where they addressed how research funding could contribute to improving gender equity in technology research in Austrian.
read more ...

Webinar on "Good practices of Conciliation at the University of Aveiro"

On September 21st, the University of Aveiro (UAVR, Portugal) held an online conference to identify and discuss solutions to facilitate work-life balance to improve the well-being of male and female employees of the University. The event, organised by the project "Linha 3UA - A vida Profissional, Pessoal e Familiar em Linha na UA" in collaboration with the CHANGE project, took place online and was attended by more than 100 people. [...]
read more ...