On February 3, 2022, Austria's Federal Minister Martin Polaschek awarded our colleague Anita THALER with the Käthe Leichter Promotion Prize for Women's Studies, Gender Studies and Equality in the World of Work, donated by the Federal Ministry of Education, Science and Research.

"Through her comprehensive work in the interdisciplinary field between technology and gender research, Anita Thaler not only generates new knowledge, but also prepares it for practical use. With her work, she thus makes a significant contribution to raising awareness of gender equality issues in society and to the further development of this important cross-cutting issue at educational and research institutions. I would like to thank Anita Thaler and I am pleased to be able to present this award," says Minister of Education, Science and Research Martin Polaschek. 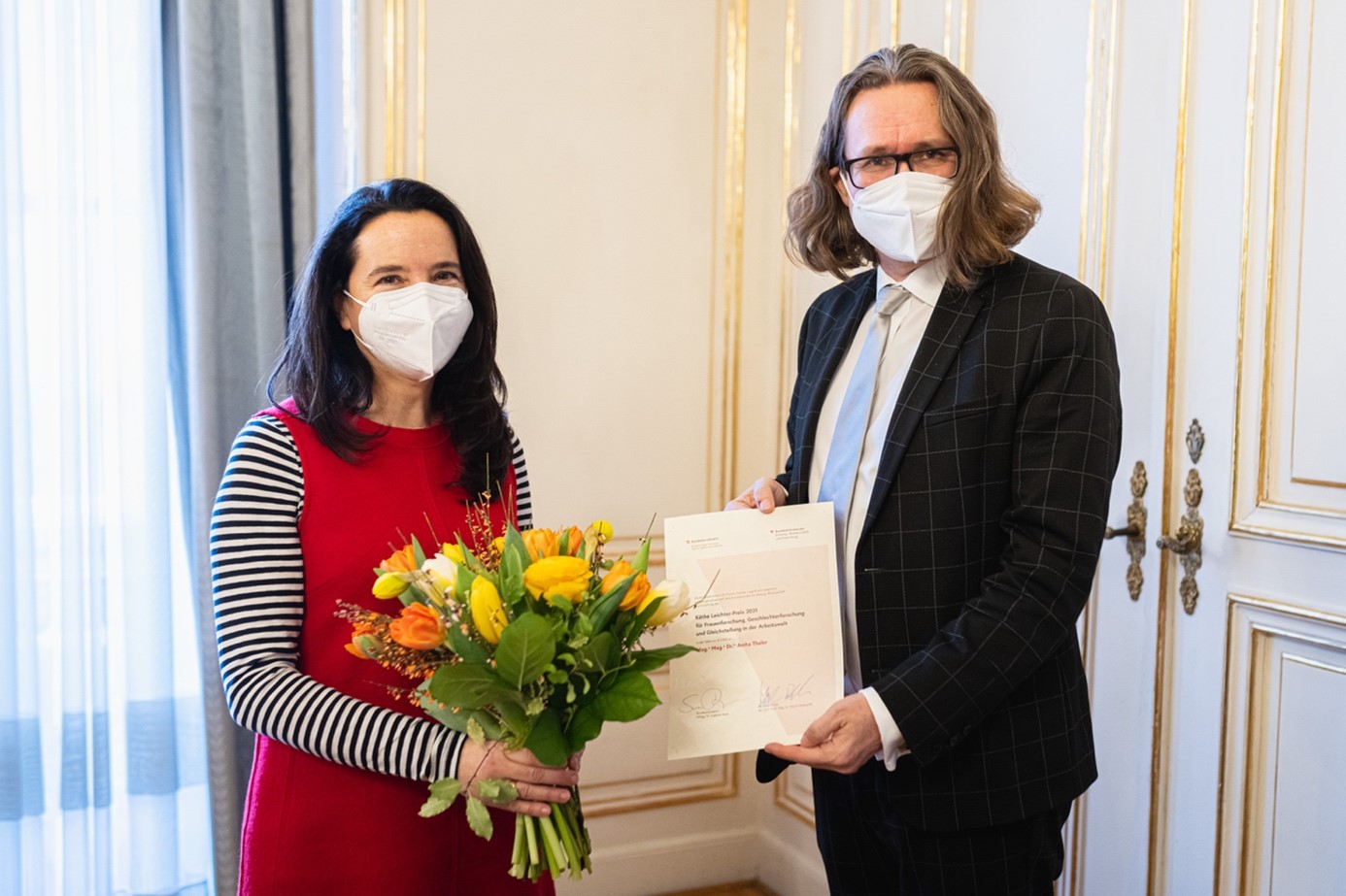 The Käthe Leichter Prize is awarded for outstanding achievements in the field of women's and gender studies in the social sciences, humanities and cultural studies as well as in the women's movement and the establishment of gender justice. The nomination as well as the selection of the awardees is made by an independent jury.
The justification states that Anita Thaler was honored for her achievements in the field of international, feminist technology and science research, as well as for her high competence in transferring this knowledge into practice with a view to the entire educational chain and preparing it for the further development of educational and research institutions:

"Thaler has been pursuing research into the significance of gender in the field of technology design, technology mediation and in the field of technical education for almost 20 years. Her dissertation, completed with distinction at the University of Graz, was also awarded the Gabriele Possaner Prize in 2007. In 2010, she received the Austrian Vocational Education Research Award for her accompanying study of the first "HTL College for Women."

Currently, her merits in the context of European research cooperation through the management of work packages, e.g. in the framework of the HORIZON program, deserve special mention. Another focus is on the areas of industrial research and medical technology, where Thaler contributes to making technologies more gender-responsive and thus of higher quality.

Her participatory research projects with school students (e.g., as part of the BMBWF's Sparkling Science program) are also of high practical relevance. Her vehicle theory, developed in this context, shows that all students, and especially female students, can be won over and inspired by technology and science through increased interdisciplinary access, if their respective interests are addressed. (Source: https://www.ots.at/presseaussendung/OTS_20220203_OTS0075/wissenschaftsminister-polaschek-verleiht-kaethe-leichter-foerderpreis-an-anita-thaler