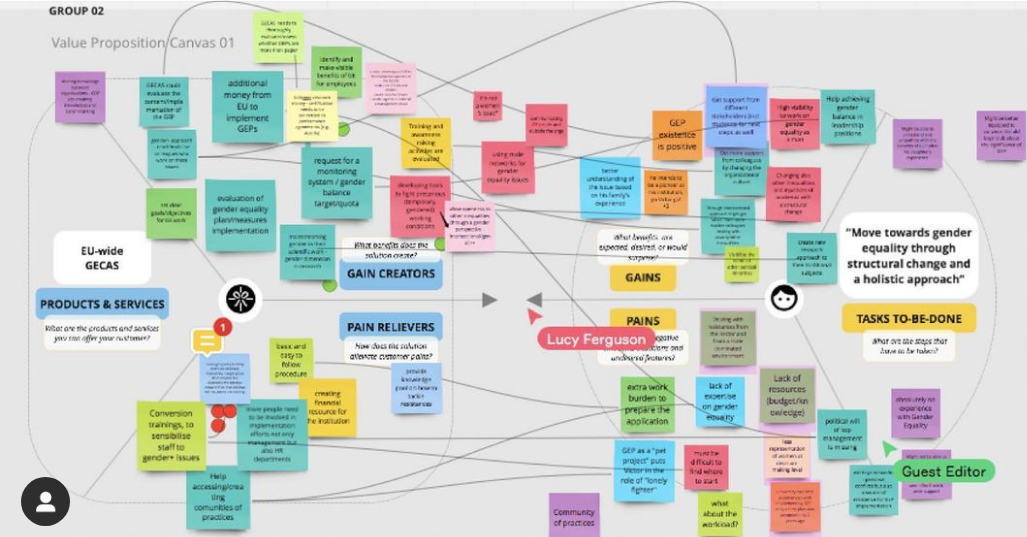 How can a European certification and award scheme (CAS) support the efforts of the European Commission to improve gender equality in higher education and research organisations? The project CASPER explored the current CAS-landscape and analysed whether a European certificate focusing on gender equality (GECAS) should be developed from scratch or rather included in an existing system. The project's findings have now been published  in three exhaustive reports and presented in a series of stakeholder workshops which additionally aimed at deepening the knowledge even further. Our CHANGE coordinator Anita Thaler has been invited to one of these online co-creation workshops on February 16th and 17th. In this online workshop—among other exercises—a value proposition canvas approach has been used to illuminate ‘pains and gains' from the perspective of a specific fictional persona to contextualise the introduction of a GECAS and its ‘pain relieving and gain creating' aspects. With a lotus blossom brainstorming technique the linkages between such a certification scheme, GEPs, minimum standards, and stakeholder involvement have been discussed. Finally, the minimum standard criteria of a basic, intermediate, and advanced level of a GECAS have been defined within two groups and fed back to the personas used in the original canvas. By inviting experts and stakeholders from different countries and various backgrounds, the CASPER team acted on their Gender+ philosophy, an intersectional non-binary gender approach, which will hopefully be used in the future GECAS.
On February 22nd, Anita Thaler and Jennifer Dahmen-Adkins attended the first international stakeholder workshop of the CHANGE sister project LeTSGEPs "Gender Budgeting in Research Institutions". Four experts talked about gender budgeting and its challenges and opportunities for structural change, Gülay Günlük-Şenesen (Istanbul University), Ermira Lubani (GRB-Programme Specialist Europe & Central Asia UN Women Regional Office), Paula Rodríguez Modroño (Pablo de Olavide University) and Finnborg Salome Steinþórsdóttir (University of Iceland). Günlük-Şenesen was summing up the specific approach of gender budgeting as "We are following the money!"